“Capitalism is inherently disinflationary and leads to cycles of boom and busts”.  – Keynes’ General Theory of Employment Interest and Money

Uncertainty is a natural part of our world touching all aspects of life – from birth to death, from buys to sells, and everything in between. Lately, uncertainty hasn’t been this high since tomorrow – to paraphrase a term used in March, 2009. After a 12 and 14% third quarter drop in the DJIA and the S&P 500 index, respectively, it is not extraneous to remind ourselves the purpose for investing surplus money (amounts that exceeds our current lifestyle needs or desires). Generally, we save so that we can afford to buy, give, or pass along sometime in the future a greater amount than we can today. By investing those savings now, we aim to have a greater real amount (after inflation and taxes) in the future as well as be compensated for the risks (uncertainty) of investing the money for some time.

What does this basic notion of investing have to do with the current, highly uncertain environment? Everything, we would argue. In a world of 1% CDs (1 year certificate of deposits), sub 2% 10 year Treasury rates, 3% inflation where stock markets often fluctuate 2-4% daily it helps to take a step back and consider the trade-offs. So, one trade-off is for a saver/investor to lock in a 1% 12 month CD and be guaranteed a small return of her money (before taxes) and lose 2% of purchasing power if inflation stays at 3%. Another alternative for someone who has investable dollars that they don’t need for spending for say, ten years: is to buy the 10 yr Treasury at less than 2% and hope that inflation averages less than 2% annually1. As of 9/30/11, the collective S&P 500 index had a dividend yield (dividend/price per share) of 2.3%; 0.38% higher than the 1.92% on the 10 year U.S. Treasury bond. A third option: buy stocks that could go up or down but offer a higher yield with the potential to return another 4-6% per year (less than historical average) or more2. Stocks may go down before they go up if investor confidence remains low and if the economy weakens; but they historically have risen when economic and earnings expectations turn positive. By the time consensus sees this better environment, stocks may well have rebounded significantly from current (depressed) levels. You may not be surprised to hear that we would opt for holding some stocks at current prices – with the proportion always reflective of our client’s risk tolerance and financial situation.

high reflecting low increases in nonfarm private payrolls (up an average only 143,000/week this year and only 75,000/week since March) and net reductions in public sector employment. Growth, as measured by GDP (gross domestic product) rose only 0.4% and 1.3%, in 1Q and 2Q, respectively.

Valuations gap As concerns over the Greek crisis escalated and uncertainty about global economic growth spread, stocks fell hard in the third quarter ended September 30th – the most since late 2008. Valuations (as measured by Price/Earnings) dropped concomitantly: the S&P 500 Index’s P/E to 12.4x from 14.5x; the S&P Euro index to 8.7x from 9.7x; Germany’s DAX index to 9.8x from 11.9x. In contrast, investors bid down yields on government bonds (bond prices move inversely to yields) as the flight to quality trade took hold (even after an S&P downgrade from AAA to AA+). The yield on the 10 year US Treasury bond dropped from 3.2% in June to below 2% in September. Consequently, bonds continue to appear rich (expensive) relative to stocks as shown in Figure 3. Stock earnings’ yields (the inverse of the S&P 500 P/E) rose while yields on the US 10 year Treasury dropped, expanding the difference, or gap, to levels akin early 2009.

As mentioned earlier, many stocks are now offering dividend yields higher than intermediate and long government bonds. Stocks can fall further but bonds can also lose money if rates rise as highlighted below. 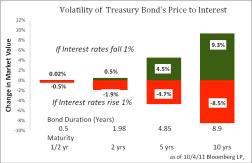 The trade-off in government bonds, at current yields, is unattractive. The 10 yr Treasury, yielding 1.8% as of 10/4/11, has a duration (a measure of price sensitivity to interest rates) of 8.9 years. Rates can’t go down much from here but if they rise to their 10 year average, this bond will lose over 24%! While yields may drop further before they rise, we will abstain from chasing them lower.

Outlook: Above average volatility in stock markets will continue until confidence and hope returns. While we expect stocks to rise if the US economy avoids another recession, we recognize the possibility that growth could slip further. Consequently, we are maintaining a high quality, diverse profile to our investment positions.

Thank you for your continued trust in Regency Wealth Management. We look forward to helping you make the appropriate trade-offs.