“Even when laws have been written down, they ought not always remain unaltered” – Aristotle

Faith or fear? Government shutdown, Syria, Al-Qaeda, unemployment, fiscal deficits, etc.  Many headlines conspire to test our confidence and turn some of us fearful.  Uncertainty can easily feed fear but markets usually climb a wall of worry. Keep the faith.  We begin the fourth quarter of 2013 with a U.S. Federal Government shut down of most nonessential departments after Congress failed to agree on a budget for the new fiscal year.  We dare posit that the impasse will likely be resolved before or shortly after the October 17th debt ceiling deadline.  Nevertheless, a long term fix to the country’s growing debt (almost doubled in the last five years) seems too elusive for our two political parties to constructively confabulate and solve. Meanwhile media coverage will undoubtedly focus on the negative and potentially dire consequences that one expert or another will present as unavoidable.

Volatility returns
Adding to the recent political vitriol were events in Syria and a head fake from the Federal Reserve on tapering its bond buying program.  Consequently, volatility rose as investors fretted over possible U.S. led military action in Syria in August and then braced for Fed action.  Both of these concerns abated in September and headline attention turned to the possible (later fact) October 1st government shutdown and the mid-month debt ceiling deadline. Through the noise the S&P 500 and the Dow Jones Industrial Average rose 5.2% and 2.1%, respectively in the quarter ending 9/30/2013 (including dividends). Returns were strong in July, equally weak in August and up modestly in September as headlines evolved.

Although the S&P 500’s collective earnings growth was anemic, corporate cash levels remain close to record highs. The unprecedented refinancing of corporate balance sheets provides a sizeable multi-year cushion to earnings per share. Price/earnings multiples for the S&P 500 remain at a reasonable 16.1 times (x) current estimated earnings, 15x estimates for 2013, and 13.8x over the next twelve months.  Dividend yields remain a reasonable 2.1%.  Stock valuations, while not as cheap as seven months ago, remain reasonable, particularly when compared to bonds.

For the nine months ended 9/30/2013, domestic stock indices are up 15-25% and most international indices are also up 10-20% with Japan’s Nikkei up 23% and South Korea’s Kospi index down 1% being the outliers among larger Asian notables.  International stocks rebounded this past quarter and their multiples remain lower than their US counterparts but they remain challenged by weaker growth and elusive confidence.

Bond Investors took note
In bond land, the Barclays Capital U.S. Aggregate Bond Index was flat for the quarter (+0.56%), rebounding from its worse quarter since 1994.
As shown in Figure 3, the ten year US Treasury note’s yield almost reached 3.0% in August, before receding back to 2.6%, up 0.1% from where it ended June 30th. 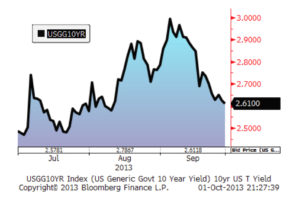 No doubt many fixed income investors across the country, after reviewing their August account statements, took note of how much their accounts declined over the summer.  Bond investors that were anchored in shorter duration bonds, like most of our clients, probably fared better than most as they avoided stretching for yield and thus have less value at risk when interest rates rise further.

Outlook
Our base case remains that the US economy continues to march along at a 2-2.5% growth rate during the second half of this year and accelerate slightly to 2.5-3% next year.  This should allow unemployment to recede towards 6.5% rate (currently 7.3%)  by mid-year 2014 possibly prompting an end to the Federal Reserve’s latest bond buying program known as QE3.  Housing markets continue to improve though the pace is expected to moderate as interest rates rise.  Please call us if you would like to discuss any of these issues further.

By now you should have all received the notice of our recent office move to Ramsey.  Thanks to you, our firm has grown steadily and this move positions us to continue to expand our efforts on your behalf.

Thank you for having faith when others have fear.