Keep Calm and Carry On

“We can have facts without thinking but we cannot have thinking without facts.” – John Dewey

Keep calm and carry on; so read the UK government posters printed during WWII and meant to be posted in the event that Nazi Germany invaded England. Fortunately, the posters went unused. The world around us always has risks, hopefully none as dire as those faced by the Allies. Europe is an economic mess, the U.S. is heading to a possible “fiscal cliff”, the economy remains weak, middle eastern tension continues, and U.S. elections are around the corner. We highlighted most of these rather obvious risks in our last quarterly letter and noted that a low cost hedging strategy was increasingly attractive to protect against a market downdraft. Our subsequent modest purchase of “out of the money” VIX Index (a measure of the implied volatility in the S&P 500 index) call options allowed us to maintain portfolio positions and thereby capture the recent stock market rally.

Why, if risks are so dire, are stock prices moving higher? Many investors, analysts, reporters and other pundits are asking the same question. The answer lies in Washington, not in the White House but at the Federal Reserve Bank (FED). As the saying goes, you can’t fight the FED. The FED is intent on maintaining unprecedented liquidity in the money markets to spur both investors and companies to make investments (and take some risks). The investors’ seemingly safer alternative, earning less than inflation at the bank, is not only unappetizing but risky. Risky? If an investor only earns 1.7% in a ten year U.S. Treasury bond and inflation averages 3.7% per annum over the next ten years her purchasing power erodes by 18%! She will get her money back but her standard of living may suffer proportionately to inflation’s corrosive value destruction. That risk, while “hidden”, is real.

For now, unemployment remains stubbornly high three years into a recovery, although it has moderated this year ahead of the elections. Consumer confidence has also rebounded over the last 12 months along with the stock market, as shown here: 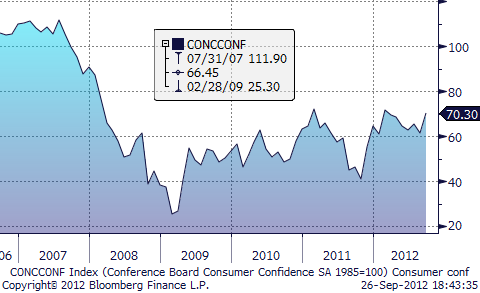 [1] The survey reflects respondents’ appraisals of current and future conditions for business, employment, and income.

Outlook Goldman Sachs estimated recently that the S&P 500 index has a greater than 95% chance of returning more than bonds over the next ten years.2 While our crystal ball is not quite so prescient, we remain constructive on stocks. Even after a 5.8% simple return on the S&P 500 index in Q3 (6.3% with reinvested dividends) domestic equities remain reasonably priced, in our opinion. Price/Earnings ratios remain below 15x (14.7x 9/28/12), the dividend yield is over 2%, and price/cash flow just over 8x (8.29x). 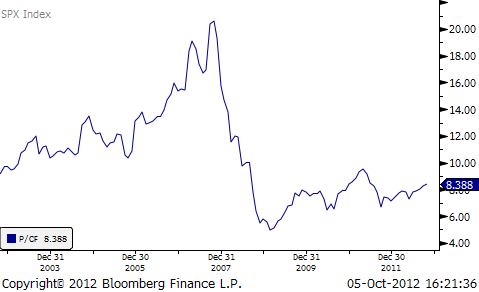 Furthermore, while earnings growth will continue to moderate as long as economic growth is weak, we sense that the market is underestimating the significant, albeit temporary, cushion that corporate America is enjoying by refinancing debt at historically low levels.

Thank you for allowing us to “think through the facts with you”. We appreciate your partnership, trust, and business.