“Plans are nothing; planning is everything.” – Dwight D. Eisenhower

Europe happens to be one of the largest producers of Brussels sprouts. Is it just coincidence that the latest market moving directive from the European Summit for unifying bank regulation across Europe emanated from Brussels, the capital of the European Union? While short on details, the plan aims to give the ECB (European Central Bank) supervisory powers over European banks. This, in turn, would enable the ECB to directly inject capital to viable banks. We hope that the plan resembles the vegetable in its rapid germination and favorable health impact (Brussels sprouts, as with broccoli and other brassicas, contains sulforaphane, a chemical believed to have potent anticancer properties) . However, we would be remiss if we didn’t keep a healthy dose of skepticism in the ability of the 17 Euro countries’ ability to negotiate a smooth solution. The fiscal imbalances are huge and the solution will take years not months. Headline risk surrounding European countries’ negotiations over support for weaker countries (Spain and Italy) will continue through year end. A slowing Europe can only dampen global growth and the systemic fallout from a breakup of the Euro currency, while a small probability, would be messy at best.

As we write this letter, we continue to analyze the possibility of hedging against this risk with options on the VIX Index (a measure of the implied volatility in the S&P 500 index). This measure moves inversely with the S&P and spiked 4x higher in the fourth quarter of 2008 when panic selling occurred. See Figure 1 that tracks the S&P (dotted line) relative to the VIX (solid line). 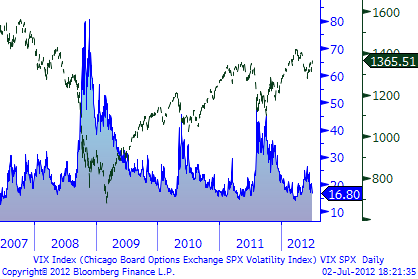 Should the Euro collapse (NOT our base case) and stocks drop sharply and the VIX rise beyond the call price the options would rise proportionately. If markets remain relatively stable, the VIX would remain low and the full (modest) initial cost of the option would be lost.

Taxes Aside from the Euro uncertainties, U.S. investors must also consider the uncertainties surrounding taxes. Should Congress fail to act before year end the Bush tax cuts that were extended two years ago will terminate. The top marginal tax rate would increase, payroll tax cuts would reverse, and taxes on dividends and capital gains would rise. Additionally, estate exclusion limits would revert down to the pre-Bush levels increasing Federal estate taxes. Lastly, the Patient Protection and Affordable Care Act (Obamacare) calls for an additional tax of 3.8% on passive income for couples earning more than $250,000 (or single filers earning more than $200,000). A lot to ponder, none of it confidence building for investors.

Sell in May and… May was not a good month for equities as the S&P dropped 6.3% before rebounding 4.1% in June, leading to a second quarter negative return of 3.3%. For the first six months of 2012 the index is up 9.5% with reinvested dividends. 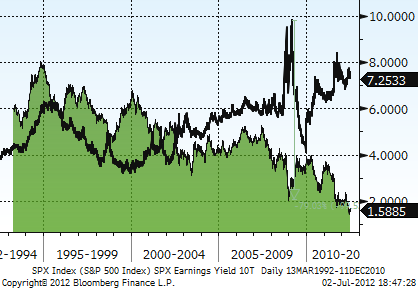 As shown in Figure 2, US stocks as measured by the inverse of the S&P 500 P/E, remain reasonably priced. The S&P 500 is trading at 13.8x actual earnings and 13.2x estimated earnings, well below the 16-18x normal range. Bonds yields remain extremely unattractive – less than stocks and inflation. While unlikely to increase sharply in the near future, they are more likely to rise than fall over the next few years.

Planning Turbulent times remind us how critical the financial planning function is in clarifying financial objectives. Having a clear understanding of the big picture by identifying the goals, determining the available resources, and exploring the potential risks helps create an environment where better decisions can be made and life can be viewed with greater context.

Regency’s comprehensive financial planning process and our Wealth Management system help you achieve those objectives. After gathering all relevant financial data, our analysis and recommendations address current and future cash flows, planning for income taxes, retirement, estate and other specific goals. Appropriate investment strategies are developed, implemented, and monitored. Results are tracked dynamically and changes in income or expenses are updated as necessary.

As quoted by Dwight D. Eisenhower above, “Plans are nothing; planning is everything”.

Thank you for letting us help you chart the course. We appreciate your partnership.