“The greatest glory in living lies not in never falling, but in rising every time we fall.” – Nelson Mandela

A rising tide lifts all boats and oh what fun it was to ride the U.S. stock market tide in 2013.  The S&P 500 Index rose in ten out of twelve months finishing the year on a strong note up 32% (with reinvested dividends, +29% without); its best since 1997. Table One recaps major market indices’ performance:

After climbing the proverbial wall of worry going into the fall U.S. Government shutdown, U.S. stock markets rose steadily in the fourth quarter confounding those who awaited an elusive pull back. Economic measures strengthened, prompting the Federal Reserve to signal that tapering will begin in January, 2014.

Even after 2013’s move, U.S. stock markets still appear reasonably priced.  Price/earnings (P/E) multiples for the S&P 500 at 17.4 times (x) estimated 2013 earnings and 15.2x 2014 are in line with long term averages.  The S&P500 Index’s 1.9% dividend yield still represents a reasonable alternative to short term and intermediate term bonds. The S&P 500’s collective earnings growth firmed and employment grew.  Unemployment, at a still high 7% (Figure 2) and may well be on its way to 6% by the end of 2014, albeit with low labor participation rates. 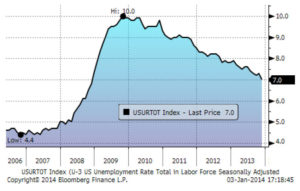 International equities lagged U.S. returns in 2013 to varying degrees.  A number of  international indices rose 20% or more ( Germany’s DAX +30%, Japan’s Nikkei +29%) but some markets lagged (South Korea’s Kospi index +1% and Australia’s ASX 200 -2%).  Emerging markets (EMG) were also weak in 2013 with the MSCI Emerging Markets Index down 5.0% (-2.5% net of dividends). Some countries fared better than others with those having heavier reliance on energy and natural resources lagging those with greater information technology, health care, and overall diversity. EMG equity valuations are at significant discounts to developed markets with aggregate P/Es under 12x, possibly presenting an opportunity should developed markets growth spill over to them.  The weakest performing assets were commodities as precious metals dropped: Silver -35% and Gold -29%. Agricultural commodities were also weak led by Corn -31% and Wheat -27%.  Energy was a moderate performer with the exception of Natural Gas+27% and  WTI Crude +7.4%.

Taper Tantrum in Bonds
After the September head fake when investors, expecting the Federal Reserve Bank (FED) to taper (decrease the level of its liquidity inducing bond purchases), were disappointed, many observers predicted that the inevitable taper wouldn’t begin before March, 2014.  The FED surprised them again in December declaring that it would begin tapering in January (decreasing monthly bond purchases by $10 billion to “only” $75 billion). Investors steadily sold bonds sending the yield on the benchmark 10 year US Treasury to 3.03%.  As shown in Figure 3, the 10 year Treasury bond yield rose 1.25% in 2013 rendering investors in the U.S.  government bond due 11/15/22 a 7+% loss.  For the year, the benchmark (Barclays Aggregate Bond Index) lost 1.9%.

As the FED reduces its bond buying pace it will orchestrate a challenging transition to “normal” market led yields.  We anticipate a steady increase in Treasury bond yields towards 4%, and thus continue to favor bonds with shorter maturities.

Municipals go to court
Municipal bond investors also had a losing year as tax exempt bonds with intermediate or longer maturities had negative returns in 2013, their first since 1999.  Investor redemptions from municipal bond funds were heavy in the second half of the year following lower prices from higher interest rates, Detroit’s bankruptcy filing and widespread media coverage of Puerto Rico’s (PR) increasing default risk.  Detroit’s Chapter Nine filing has potential implications for general creditors and PR has practical implications as many state and national municipal bond funds own the triple tax free bonds of the Commonwealth of Puerto Rico: some long PR bonds lost over 35% in 2013.

Outlook
The US economy enters 2014 on a stronger note and GDP could  expand at a  2.5-3%+ rate.  This would allow unemployment to recede towards a 6.5% rate (currently 7.0%) around mid-year and possibly to 6.0% by year end 2014.  U.S. housing markets continue to improve though the pace will likely moderate as interest rates rise.

Europe should rebound towards modest positive economic growth this year. Emerging markets should bounce back from a weak 2013 but results and returns will continue to be uneven.

While we all hope that 2013’s rising tide continues, we remain vigilant; monitoring, analyzing and positioning investments to conservatively shape portfolios to help you meet your financial goals. Please call us if you would like to discuss any of these or other issues.

Having risen from prior falls we are not seeking glory but prudent effectiveness as your “regents”.

Thank you for allowing us to be on your team.