“Common Sense is Not so Common” – Voltaire

Investors started 2013 visibly exuberant with US politicians’ last minute crafting of a tax compromise a day after the U.S. technically went over the “Fiscal Cliff”. Equity markets reversed their late December weakness and rallied hard. After the S&P 500 lost 2% in the second half of December 2012, it rose 2.5% on January 2, 2013 to 1462. Characteristically, Congress claimed “victory” in “reducing” taxes (after they let them rise). You just can’t make this stuff up. Negotiations now turn to the unfinished business of expense reductions and expanding the debt ceiling a couple of months from now.

Impressively, in an environment of slowing global economic growth, stubbornly high U.S. unemployment, and a European recession, stock markets fared well in 2012: the S&P 500 rose 16% (with dividends), and most global stock markets rose 10% or more. The notable exceptions were Spain and Japan, down in U.S. Dollar terms for the year.

Bonds rallied again – the U.S. 10 year note’s yield dropped to 1.75% from 2.0%, at year-end 2012 and 2011, respectively. All major global benchmark 10 year notes shed yield in 2012 save Spain’s – it rose 21 basis points to 5.20% – but well off its high. 2012’s stock market volatility, as measured by the VIX, was relatively muted YOY averaging 18% vs. the prior two years’ 23%. Stock market valuations continue to appear reasonable with current P/Es (Price/Earnings) at 14.2 times (x) 2012 estimated earnings and just over 12×1 [1] 2013’s forward estimates. Dividend yields of 2.2% easily surpass the 1.9% yield of the ten year U.S. Treasury note (both as of 1/3/2013). Higher dividend yields are available in foreign stocks (3-5%) but visibility in earnings is inferior. The “FED Model” that compares the stock market’s yield (what we would earn on the S&P 500 if all firms therein paid all of their earnings in dividends) with the ten year Treasury bond shows one argument as to why stocks are attractive vs. bonds. 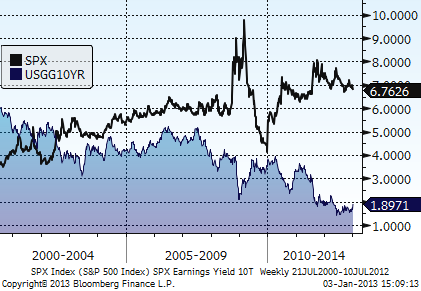 We anticipate modestly higher economic growth in 2013. Bonds are unlikely to match 2012 returns given their low current yields. Rates will likely be higher a year from now, but not meaningfully unless employment growth rebounds. Stocks remain reasonably priced but it will require multiple expansion to deliver double digit stock market returns in 2013. Continued European uncertainties and weaker
global economies continue to point us to a US bias.

Taxes Bush-era tax cuts expired at year-end 2012 before Congress acted on the evening of January 1, 2013 to reinstate most tax rates, increase others, end some temporary tax accommodations and extend others.

Table 1: The American Tax Relief Act of 2012
TATRA (preliminary and subject to change) [2]

The Tax Policy Center estimates that the average tax increases will be as follows:

While increased taxes imply lower disposable income that can dampen spending, the end to tax uncertainty bodes well for consumer and business confidence.

Regardless of what politicians call it, this marks the first substantive tax increase since 1993. It is critical that the next step of bi-partisan negotiations on entitlements, debt ceiling, and other expense cuts also be material, long term, and timely. Our country cannot afford to continue increasing government expenses: doing so would seriously hinder our country’s future global competitiveness.

Common sense may not be so common. Let’s hope that our political representatives in Washington, D.C. prudently apply some to our government’s fiscal situation in 2013 without undo melodrama.

Thank you for allowing us to share our uncommon common sense with you. We appreciate your partnership, trust, and business. Happy New Year!