“The reason I score so many goals is that I don’t focus on where the puck is but where it is going to be.” – Wayne Gretzky, Hall of Fame Hockey Legend

Looking ahead instead of looking behind is good advice for hockey players but essential for successful investing. Both participants skate on thin ice but at least hockey players play on a smooth surface and where the puck usually bounces off the boards in a predictable way. Investors live in a less predictable “rink”.

Looking Back In 2011, domestic economic uncertainty was exacerbated by Middle Eastern political changes, a Japanese Tsunami, European funding issues, and domestic political gridlock. None of these were confidence boosting. As shown below in Figure 1, the stock market had three distinct movements last year, an up move from January-April, +7%, a swoon from May-early October, -19%, and early October-year end, +10%. For the year, it was flat nd had a total return of 2.1% with reinvested dividends. The S&P “skated” within a 20% range. 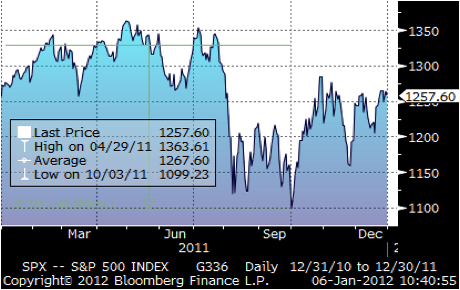 US economic fundamentals were mixed for much of 2011 but have been improving since August. Growth, as measured by GDP (Gross Domestic Product) rose only 0.4%, 1.3%, and 1.8% in each of the first three quarters, respectively. Initial jobless claims started dropping meaningfully in September.

In spite of a slowing global economic backdrop, large corporate earnings and cash flows grew at a robust pace in 2011. Investors ignored this as the numerous uncertainties drove them into US Treasuries; viewed as an attractive safe haven even with 2% or less 10 year yield; this from a highly leveraged US government intent on inflating the future. Year end valuations of stocks vs. bonds are comparable to early 2009:

Looking ahead Consensus GDP estimates of 2.5% for 4Q11 and 3%+ for 2012 seem a little high to us but we agree with their direction. Europe remains the wildcard near-term as a deep and prolonged recession there would dampen US and global growth. US government bond yields remain unattractive. While they may stay low for some time, they could also quickly move up if economic traction takes hold and Euro uncertainty abates. The 10 yr Treasury, yielding 1.9%, has a modified duration (price sensitivity to interest rates) of 8.9 years. Rates can’t go down much from here but if they rise to 5% (10yr T’s 10 year average), this bond can lose over 23%! We will forego chasing them here. 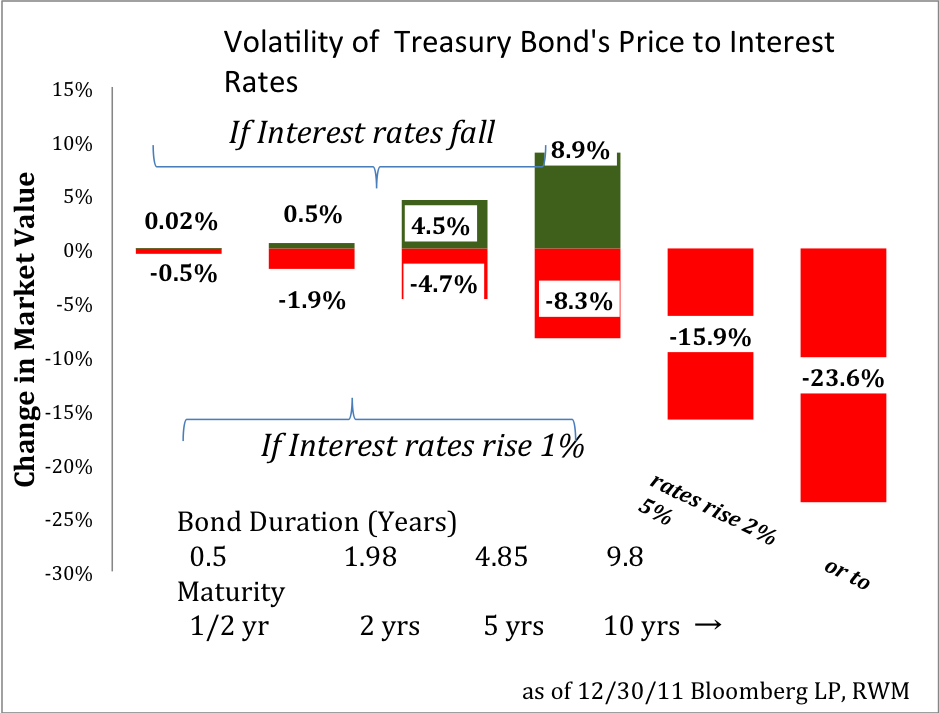 Municipal bonds are unlikely to repeat their strong returns of 2011 but remain reasonably priced and should fare better than Treasuries. Investment grade corporate bonds are also superior alternatives to Treasuries. Preferred stocks of leading banks (yielding 7-9%) are also attractive as funding is improving, capital and liquidity have risen and problem loans have abated.

Figure 5: US Banks have improved funding 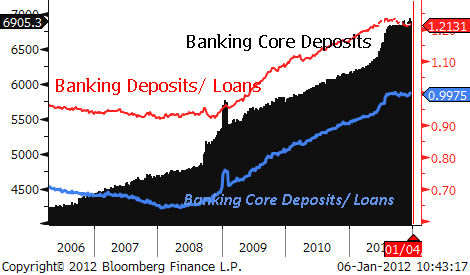 US stocks also appear reasonably priced with a better outlook than European counterparts in the near term. From a technical perspective, energy and industrials are strong, financials and materials are bouncing off weakness and consumer staples, info tech, and utilities are weakening. Fundamentals are stronger and valuations are relatively attractive in info tech and industrials. We are not seeing great values in consumer staples, energy, or materials.

The investment, economic, and political environment will undoubtedly remain interesting in 2012. Above average volatility in stock markets will likely continue as the Euro drama plays out. After little, if any, investment progress in 2011, here is hoping for a stronger 2012.

Thank you for your continued trust in Regency Wealth Management. We look forward to looking ahead together.