What a difference a year makes! If you have children it is sometimes easy to miss how quickly they grow and mature. Our daily interaction can sometimes cloud our perspective. Have you ever had a friend or relative visit and comment something like, “I can’t believe how big little Katie has gotten” (a safe example as both of us have a daughter named Katie)? Those of us with older ones are more apt to say, “what a difference 10 years make”. …”while it seems like just yesterday”….

What a difference a year makes! Investors went from being scared half to death early in the year and convinced that government attempts to avoid the next great depression were doomed to fail (as was every single bank!) to allowing for the possibility of successfully stemming recession (mid-year) to discounting a strong economic recovery in 2010 (fueling a fall rally in stocks). A year ago, we constructively postulated that record low interest rates, FDIC insurance, social security, unemployment insurance, and expanding government budgets would all work to arrest the recession

Corporate (non-financial) America’s lack of egregious leverage and rapid reduction in jobs allowed the majority of their earnings to beat Wall Street estimates in the second and third quarters. Government programs, led by “cash for clunkers” in Q3, and the expected expiration (though later extended) of first time homebuyer rebates in early November certainly helped. Finally, the lack of any return in relatively safe money market funds or most bank checking and savings accounts along with very low CD rates in Q4, helped convince some investors, assisted by their trusted advisors, to put money back to work. Disaster was averted. 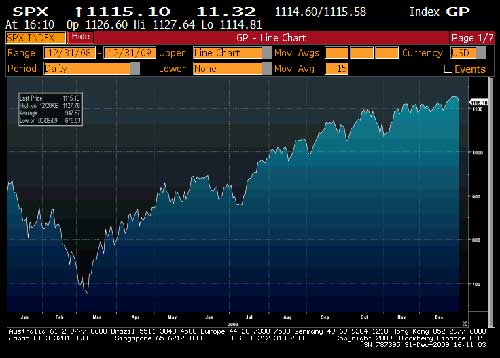 The opinions voiced in this material are for general information only and are not intended to provide specific advice or recommendations for any individual. To determine which investment(s) may be appropriate for you, consult your financial advisor prior to investing. All performance referenced is historical and is no guarantee of future results. All indices are unmanaged and cannot be invested into directly.

However, bailout schemes, stimulus programs, and recession induced declines in tax revenues are ballooning American state and federal government deficits.  Health care reform probably won’t help this equation in the near term.   We are likely to see higher US income taxes sooner than later.  A number of dichotomies, or contradictions, have developed – how can interest rates remain low if the economy is growing, the government is borrowing more, and the bulk of these borrowings are from confidence sensitive overseas buyers?  Why are oil and gold prices up while inflation is low?  Disaster Ahoy?

Is the US dollar vulnerable to losing its reserve currency status?  Multi-decade economic dominance, a strong legal system, and a stable political system have long made the greenback attractive relative to other global alternatives.  Yet, even if our fiscal deficits were not climbing rapidly and our government policies weren’t becoming less friendly to capitalistic tenets, the plain truth is that developing countries are, well, developing.  The free flow of information and capital allow lesser developing countries to catch up, and potentially surpass some of our country’s historical competitive advantages.  Meanwhile, the Federal Reserve, US Treasury Department, and our government need to carefully reverse monetary and fiscal accommodations before they lead to another speculative asset bubble that will jeopardize our economy’s incipient recovery. Our guess is that in the process, interest rates will rise, inflation will increase, growth will continue, and markets will fluctuate as consensus views are assessed and re-assessed in a time of challenging transition.  The US dollar, while possibly continuing to weaken is more likely to do so in a moderate way since in the near term there is no effective replacement to it as a global reserve currency.  In the longer term, the US share of global economic growth this century is more likely to be less than it was in the last one.  We envision our investment allocations will parallel this shift over time.

Our goal is to try to deliver competitive returns with below average risk, thus being effective stewards of your money. By God’s grace, using state of the art tools and enjoying a strong partnership, we were able to deliver this in 2009 to our great clients.  We will endeavor to pursue similar results in 2010 and beyond.

Thank you for your continued trust in Regency Wealth Management, Happy New Year!