“Be sure you put your feet in the right place, then stand firm.”
– Abraham Lincoln

Ancient History We entered 2012 with continued uncertainty over Greece and its possible negative consequence for European economies and possibly the world’s. Fortunately, Greece finally defaulted. Huh? Yes, they finally completed their debt restructuring handing investors a nifty 50%+ loss on the original face value on the bonds. But, importantly, they did so only after the European Central Bank established a bank safety net on December 8, 2011. The plan allowed banks to extend maturing short term debt by 36 months. Although Greece’s and the Euro Economic Union’s challenges are not over, the restructuring buys them time to reform. Now comes the hard and politically difficult follow through but at least the near term systemic risk has declined. Consequently, Italian and Spanish bond yields declined to more reasonable levels.

Climate change The northeastern US experienced an unusually mild winter coincident with a more constructive stock market. The S&P rose an impressive 12% in the quarter. Even better returns were recorded in Germany (DAX), Japan (NKY), Brazil (IBOV), and the tech heavy Nasdaq (CCMP) (with an assist from Apple). 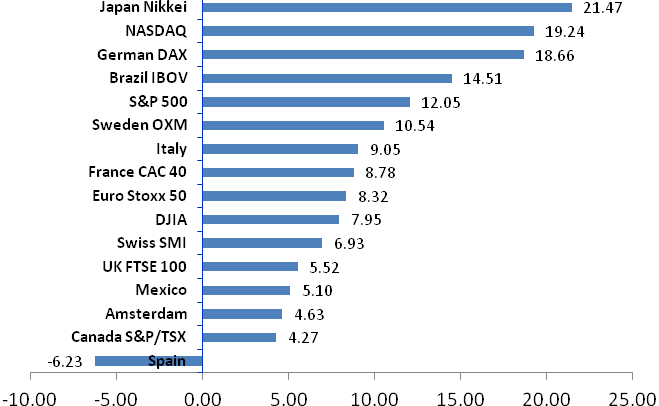 All major global stock indices were up in 1Q12 except for Spain’s IBEX. Some of the rally reflects the aforementioned abatement in Europe but we ascribe the rest to investor appreciation of improved fundamentals and reasonable valuations.

Earnings for the S&P 500 grew 14% per annum over the last two years (2010-2011) as they recovered from 2008-09’s deep recession. Investors were understandably slow to embrace the improvements as they focused on numerous risks; housing weakness, geopolitical issues, unemployment, US and European fiscal woes. Bond investors were rewarded by a Fed induced rally that drove interest rates to record lows. That dance, we must report, is now likely to be over leaving bond investors vulnerable to losses and savers losing purchasing power as they earn less at the bank than inflation. 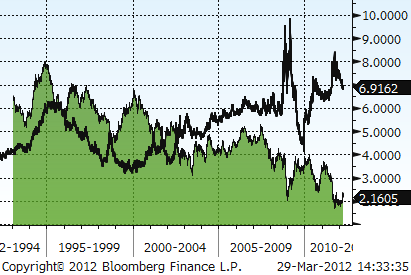 Looking ahead Earnings growth is slowing but is still outpacing inflation. Even after the 1Q rally, stocks remain attractive relative to bonds. Investors will likely, in the absence of material surprises, use pullbacks in stocks to increase exposures. Bond investors may wait until interest rate horse is out of the barn and sell into weakness once rates rise. In 1Q12 the yield in the 10 year moved in a 58 basis points range (0.58%). This represented more than a 4% range in the price of the 10 year U.S. Treasury bond.

Corporate bonds also rallied in 1Q12 with good performance in investment grade and high yield bonds. Preferred stocks were particularly strong with the Merrill Lynch index of preferred stocks up 7% in 1Q. The index yield dropped 1% to a still modestly attractive 4.7%.

Thank you for your “standing firm” with Regency Wealth Management. We look forward to looking ahead together.