“When you come to a fork in the road, take it.”
– Yogi Berra

Could the recent Middle Eastern and North Africa political turmoil and Japanese earthquake and Tsunami derail the two year old stock market rally?  Will the nascent U.S. economic recovery stall or accelerate?  Is inflation a near term risk?  It seems we are at a fork in the road.

1Q Momentum stalled. Following a strong 4th quarter stock market rally, political unrest in the Middle East and North Africa increased uncertainty and renewed concern about inflation.  In response, stock markets dropped modestly and oil prices spiked.  Then the March 11th Japanese earthquake and tsunami resulted in the tragic loss of thousands of lives and the risk of nuclear power plant radiation leaks.   These dramatic events created a desire for some investors to sell risk amidst uncertainty before buyers stepped in.

Volatility reflects real time risk sentiment.  It can also spell opportunity.  While some investors were undoubtedly rattled by the stock action in late February and mid-March, longer term investors stayed the course fixing their eyes on constructive fundamentals.  We believe the US stock market may be higher a year from now reflecting continued economic growth in 2011.  Personal consumption, unemployment, and leading indicators are all improving as shown below.  However, consumers’ disposable income is diminished by higher gasoline prices and local tax hikes.   Corporate earnings strength will likely moderate in 2011 as higher input costs for producers will squeeze some margins.  The resulting impact on investors of increased volatility, earnings pressures, and wavering consumer confidence is harder to gauge. 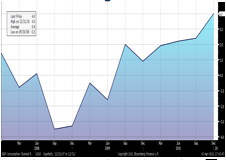 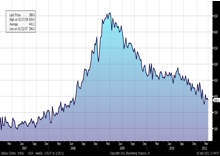 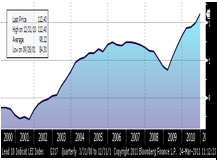 Inflation risks are rising.  Commodity prices rose strongly over the seven months ended March 31st, as shown in Figure 6.  Will broad inflation follow?  Softness in labor and housing markets should stem inflationary pressures in the near term but as employment and loan growth resumes, the ample liquidity created by the Federal Reserve should inflate prices.  Producers with pricing power will pass along some of their higher input and distribution costs; this is already evident in groceries, energy, and clothing.

Figure 6: Commodities Spike Higher DJUBS Commodity index is composed of futures contracts on 19 physical commodities. It reflects the return of underlying commodity futures price movements only. It is quoted in USD.

“To know the road ahead, ask those coming back.” – Old Chinese proverb

The risk of inflation returning sooner than later is rising, much to the eventual chagrin of savers and retirees living on fixed incomes.  The UBS commodities total return index depicted above is up 35% since June 30th 2010; Agriculture +65%, Industrial Metals +36%, and Energy +11%.  Yet the government’s Consumer Price Index is only up 2.1% YOY as of February, 2011.  Are we at an “inflation fork in the road”?  We look to previous inflationary periods and are prompted to avoid longer duration bonds and to be alert to stagflation.  Inflation spurred by higher employment and demand expands earnings and P/Es (price/earnings multiples) as nominal earnings rise.  Stagflation, last seen in the late 1970s, occurs as commodity price increases boost inflationary expectations, interest rates rise, and earnings drop with concomitant contraction in P/E multiples.  We don’t know how this cycle will play out but will remain vigilant to economic trends as they evolve and position portfolios according to our conclusions.

Thank you for your continued trust in Regency Wealth Management.  Here’s hoping that we all take the right road in everything we do while the gift of life is here.